The shadows crept along as the night grew old. Even the full moon had hidden itself behind the darkened clouds. This was the hour you didn’t want to be outside, this was the time when all hell broke loose. And there was nothing you could do to stop it. You couldn’t run, you couldn’t hide, because they’d find you. Their ability to sneak in and out of the smallest spaces without being noticed, made them perfect for this master plan. But whose plan was it?

Macy spent the better half of Saturday gathering all the things she’d need for the camping trip. She and her friends had planned this, for what seemed like forever. She doubled checked her pack, made sure everything fit snuggly, and tested the weight. They’d be hiking a bit of the way before reaching the campgrounds. Too much weight meant too slow a hike, and most likely, a back ache. She didn’t want anything to mess up this trip. Feeling the weight again, she decided she needed to pare it down. She just wasn’t sure what to take out.

Sunday morning came up fast. Macy was pretty sure she didn’t sleep, and that wasn’t a good thing. Sandy, Patty and Kate arrived shortly after six, when the sun was just coming up over the eastern mountains. The chill in the air meant the girls would need their windbreakers to keep out the cold. Each donned a different color, laughing as they looked at each other. “A bunch of misfits” chortled Patty, making them laugh even more. Finally, everything was packed in the SUV and they hopped in, raring to go.

The ride seemed to be taking longer than expected. “Are you sure we’re going the right way?” asked Kate. “We’ve been on the road for two hours already. The sun is up and we haven’t even reached the trails.” The other girls all nodded in agreement. Macy wasn’t sure if she had missed a turn somewhere, or if they were all too anxious. Trying to turn her GPS on, she found she had no signal. “Must be a dead spot here” she told the others. They all knew if they were on the right track, there were no dead spots. This was something they already looked into.

Macy started to panic, trying to be sure the other girls didn’t see her face. The gas gauge was falling and there were no signs for gas, lodging, food, nothing. She pulled over to the side of the road, trying to keep herself under control. The others had dozed off, until the car stopped. They thought they had reached the trails, and began chattering excitedly, then they realized they didn’t know where they were.

By this time the sun had started to set in the western sky. There was no shield from the elements, and the wind was brutal. There was no way they could stay there all night. Even the car had chilled once Macy turned it off.

A rustling sound came from the left side of the car, but nothing was there. They all agreed it was probably the wind, and tried to nestle together to stay as warm as possible. Patty suggested they turn around and head back in the direction they came, but the twilight can be deceiving. What if they got lost even farther from home? Besides, Macy reminded them, they were running out of fuel. They’d have to wait for morning, when they could see where they were going. Finally drifting off to sleep, they were awakened by a loud knocking sound.

Looking outside the windows, they saw nothing. Shrugging it off, they attempted to reclaim the sleep they desperately needed. Again, a loud knocking. This time, Macy flipped on the interior lights in the car, hoping to see what was causing all the noise. Still, there was nothing. A blur came across the windshield, and around the side of the car. Frightened, the girls hovered closer together. There it was again. This time, bigger than before. Then it was gone. After a short while, they fell back to sleep, and awakened with the first light. Macy attempted to start the car, but nothing happened. It wouldn’t turn over. Looking at her friends, she shrugged and said, “We wanted to hike and camp, guess this is it.”

As they exited the car, they felt a strong chill pierce through them. Patty let out a scream and as they turned to see what she was yelling about, she disappeared. Terrified by what they saw, the three girls clung to each other, promising to not let go. Kate brought it to their attention that she needed to use a bathroom. Macy and Sandy realized they did, too, but none of them would leave the others. Finally, unable to hold out, Kate let go and headed to the other side of the car. A small noise came from there, and they knew. Kate was gone, too. Making their way back into the car, Macy & Sandy, both pale as could be, wondered when it would be their turn. Locking the doors, Macy took a deep breath and asked Sandy if she thought the two were playing a trick on them. Sandy reminded her they all saw Patty disappear before them.

Huddled together, finding some solace in knowing they were not alone, both girls drifted off to sleep. When Macy awakened, Sandy was gone. Not a trace of her was left behind. Even her pack was gone. Afraid to look out the window of the car, she kept her head down, trying to figure out what was going on. She was alone now. And more afraid than ever. Getting up the nerve, she lifted her head and looked out the windshield. Staring back at her were two black eyes, surrounded by a swirling cloud of darkness. It was patient, just watching her, and she starred back. It seemed disconcerted for a moment, then resumed its stare. It had waited long enough. Slipping into the car through the windshield, it grabbed Macy and dragged her with it. The car was left abandoned on the side of the road. When the police found it, there was no trace of the girls inside. The only thing they noticed was a cloud of dark mist coming over the horizon…heading straight for them. 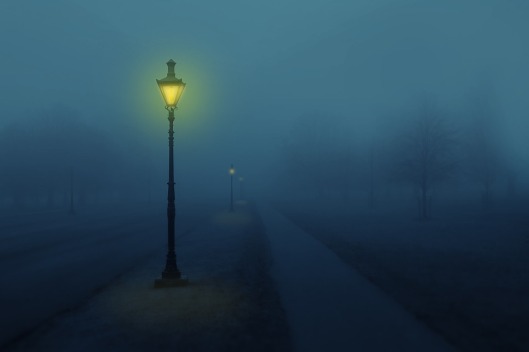 Mists weave in and out of brush

In the forest, a stillness, a hush

Which lingers in the quietude

As morn begins its soft prelude

And wakens to the faintest breeze

Enveloped round the sleepy trees

A sanctuary, a forgotten place

Where life slows, to a calmer pace

A chance to disappear, unheard

Where nothing is said, not a word

And as the winds whisper in my ear

To show the beauty I’ve come to see

And rest mine, weary eyes on thee

Soak in, all those in nature’s attendance

The Glory of God, in subtle resplendence

Mystery shrouds, in a misty dawn

Gathering, while the city sleeps

About the landscape, silently creep

As not to awaken the human race

Whose shadows linger in this place

For while they dream, of tomorrow

Others mourn, in unearthly sorrow

Until the fog lifts, and the air, clear

©2019 Dorinda Duclos All Rights Reserved
Photo by © Paul Militaru Used with permission – Thank you, Paul!! Do visit his blog to see all his wonderful photos!!

Along the banks they stand, proudly, and wait

Statuesque, majestic trees, one after the other

Try to shake the gloom, as limbs begin to shudder

From tiny particles, tis the rime, of winter’s bane

All they want is warmth, to ease the chilling pain

But alas, when day is over, and the sunlight strays

Evening settles in with more, of that melancholic haze