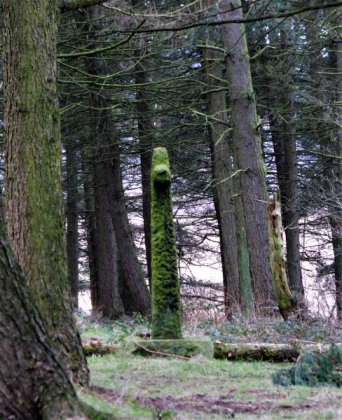 I walk the path, far into the woods, and suddenly lose my way. Ahead, I sense an energy, one I haven’t felt all day. I see it rising, high above me, covered in moss from the land, and realize I am no longer lost, for this stone shows the path, well planned.

It tells me to journey onward, no need to fear this place; for here is where the spirits dance, how I long to see their face. I marvel at this majestic sight, on a marble slab, it stands; and with its mighty energy, I bow, and clasp my hands.

Allowing those around me, to channel their way through; and thank the kindly forest, for keeping them, here, so true. I best be on my way, I have other places to see; however long it takes me, I have found my energy.

For in this forest, serenity, as the spirits take control; and I shall return, again, one day, for I am one, now, with its soul.

Join Sue, every Thursday, as she delights us with a new photo (or two)!This one is is quite interesting! 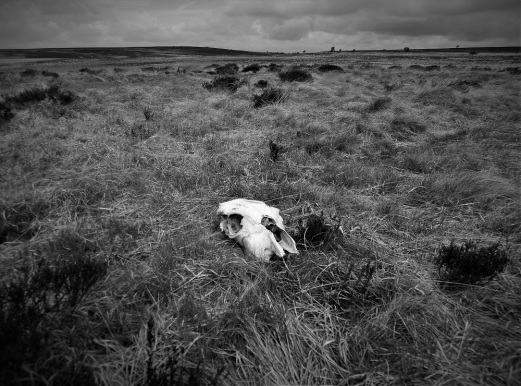 We begin from flesh

Return to the earth as bone

Hoping, as we, mere mortals

End, with the sheer grace of God

Join Sue, every Thursday, as she delights us with a new photo (or two)!

I long to be the rocks, bathing in the crystal sea; far away from the land I know, tis where I want to be. Graced with azure painted skies, and just a hint of pink; I sit upon the water’s edge, and allow myself to think. Dream about the endless hours, I could spend about this place; where time here really does stand still, and I can take up space. Without the endless drudgery of the crazy day to day; when my mind can find the clarity, yet still be allowed to stray. Eternity lies far beyond, the horizon meets it there; one day I’ll find that sacred bliss, and just breathe, in its air.

Join Sue, every Thursday, as she delights us with a new photo (or two)!  This photo is pure bliss  ❤

Branches tumbled like the water, a cascade of color, decorating the land. Even the rocks showed signs of joining the party. Fall had arrived, and it was Agatha’s favorite season. She adored the changing from greens to gold, and red, and oh, she could go on forever. This was her secret place, where no one would ever find her. She’d steal away from the house, while mama was napping, and run as fast as she could.

Each day brought new changes to the scape she had come to love so dearly. But only in autumn. Never would you find her here in any other season. There wasn’t anything that attracted her eyes, and she was bored of always seeing green. She longed for endless days of purple flowers and blue waterfalls, draping itself along the rocks that hung over the cliff. There was evidence of a disturbance under the falls, and Agatha was very careful not to get too close.

She didn’t have much time to spend in her favorite part of the mountains. Her mother would be looking for her soon. “Oh Agatha”, she’d always say. “Have you been off daydreaming again?” Agatha never really answered her, she would only smile her shy smile and scurry off into her room. Grabbing her colored pencils and a drawing pad, she drew what she remembered, making sure the colors were exactly as she had seen. She knew she’d return again, tomorrow, as long as the rains held off, but she didn’t want to miss the chance to capture this magical place she called her own.

As soon as mama fell asleep, Agatha was off again, running faster than ever before. The light was beginning to change, and the sun was setting sooner. She wouldn’t be able to capture the colors if she didn’t hurry herself along. When she got there, she noticed something out of place. The red branches hanging down, had been moved. There was a large opening, just behind the bottom of the waterfall, where it fell onto the rocks. She watched her steps carefully, slipping several times on the wet stone, but she had to get closer to look inside.

On her final step, she fell, and landed inside a cave. This was no ordinary cave. It was filled with colors beyond Agatha’s imagination. Rocks glistened and sparkled even though there was no light.  Spellbound by what she saw, she knew exactly what she had to do. Slowly, as to not fall again, she made her way back to the opening, and, taking once last glance toward home, she carefully closed the vines, turned around, and never looked back again.

Join Sue, every Thursday, as she delights us with a new photo (or two)!  Thank you for this incredibly colorful photo!

In swirls of mist, the echoes speak
Take heed to what you hear
For once the sunlight starts to peek
This all will, soon, disappear

Shrouded by gray, in the foggy morn
A spectral being, arrives, forlorn

His castle, now in ruins, lay
As he recalls that fateful day

When men stood brave, atop the wall
Then mightily, one by one, did fall

Soldiers, rigid, took the chance
Heroic men, who bowed to thee
Imprisoned, by your ignorant stance
A realm of misfortune, you did not foresee

Now, this being, in limbo’s cell
Fears, for there is no return
Caught in eternal living hell
His freedom is what he yearns

Join Sue, every Thursday, as she delights us with a new photo (or two)!  Thank you for this amazingly, haunting photo!